In our final instalment of SEN Journal: Online Exclusives previews on the theme of nationalism, ethnicity, and sport, we are delighted to present Vlado Kotnik’s article on the role of skiing in Slovenian identity, culture and society. 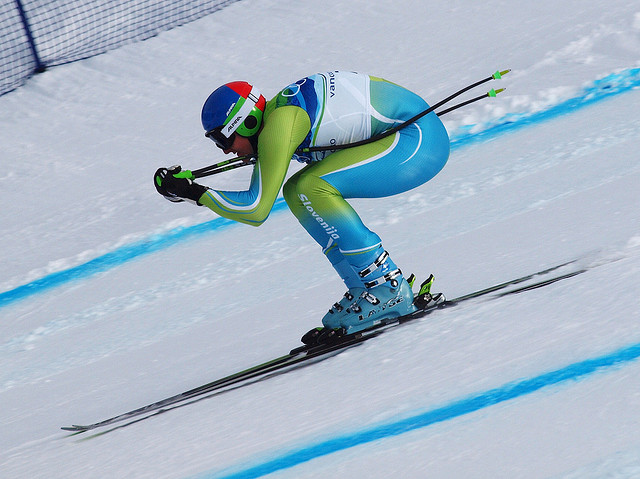 This paper explores the role of alpine skiing in Slovenian culture and society by focusing on the construction and maintenance of a sporting national story. The research, which is based on discourse analysis and the ethnographic method, suggests that in Slovenia, alpine skiing, with its natural sceneries, amateurish background, sporting events, media attention and national heroes, is one of the main sports arenas in which the Slovenian nation-imagining, nationalism and national identity have been exercised throughout the twentieth century. The national importance of alpine skiing was further confirmed after Slovenia’s secession from Yugoslavia. The findings also suggest that the media, especially television, perpetuated the myth of skiing as the Slovenian national sport and as an autochthonous Slovenian sporting practice.

For decades the Slovenian public, from the cultural, political and sports milieus to the media, has shared the belief that alpine skiing has been important in building the self-image of the modern Slovenian nation. Alpine skiing, with its references to the extraordinary landscape of a unique land and natural monuments of national importance, fits perfectly with the essentialist ideology of national sport. During the winter ski season, internationally recognised Slovenian ski centres, particularly Kranjska Gora and Maribor (ski resorts which hosted World Ski Cup races), are intensively involved in the building of a national sporting iconography.(1)

In Slovenia, alpine skiing, with its natural sceneries, tradition, ancillary amateurish sporting events, media attention and national heroes, is one of the main sports arenas in which Slovenian national consciousness has been constituted. After Slovenia’s secession from Yugoslavia with the so-called ‘ten-days-independence-war’ in 1991, it maintained this role. Among the sports practiced on the (inter)national level in Slovenia, skiing certainly took the most prominent role in constituting the nation. However, any reflection of nationalism in sports in Slovenia still elicits negative connotations. It is usually subjugated to a discussion of the ambivalence between shame and pride, justification and denial. This situation constrains rather than assists an analysis seeking to focus on the Slovenian nation building processes, and the role of national sporting identity and the media in this.

The aim of this article is to examine a limited part of a much wider story about alpine skiing by focusing on the components that made this sport ‘the’ national sport of Slovenia, and embodied it as indigenous and authentic Slovenian sporting practice. I will argue that the Slovenian case is worthy of study as the results of this analysis can contribute to theory-building about sport and national identity…

Given that modern sports emerged as part of a wave of ‘invented traditions’ (Hobsbawm 1993) in Western-centered cultures associated with nation- building at the end of the nineteenth century, it is not surprising that different disciplines, including history, kinesiology, sociology, anthropology, sports studies, media studies, media-sport studies and other domains, have traditionally taken the nation-state and national identity as a key point of reference and context (e.g. in relation to Britain: Barnett 1990; Whannel 1992; Hargreaves 1987; to Australia: Goldlust 1987; Mewett 1999; to Norway: Klausen 1999; to Sweden: Sörlin 1995; to the United States:Chandler 1988; Pope 1993, 1997; to various countries or regions: Porter and Smith 2004; Bairner 2001; Wagg 2005). A great deal of the literature which considers the topic of national sporting identities in sustaining national, regional or group identities through different types of sports (Archetti 1999; Crolley and Hand 2002; Giulianotti 1999; Haynes 1995; Gruneau and Whitson 1993; Mangan 1996) confirms that sports have helped shape national identities, and further, that national cultures have shaped contemporary sports. A succession of authors who conducted sociological or other kinds of research on the link between sports issues and society, media and political, national or class ideologies (Barnett 1990; Hargreaves 1982; Hoberman 1984; Vaugrand 1999; Brohm and Bambuck 1992; Dunning 1971; Bourdieu 1978; Blanchard 1995; Sands 1999) have comprehensively shown that national mythmaking through sport is common across continents. Also, the constantly growing, intersecting and transforming relationship between sports, national identity, nationalism and the role of the media is discussed in interdisciplinary and multidisciplinary terms (Rader 1984; Goldlust 1987; Rowe 1999; Wenner 1989, 1998; Whannel 1992).

Many of the above-mentioned western-centered studies presuppose the nation as a fixed, independent, ready-constituted and self-evident organisational form which is able to exploit its social resources, sports being one of them, to achieve its national goals and unity. Nations with long historical continuity and established cultures often have greater potential to dominate in the sporting arena, producing great athletes and sporting stories. However, this framework does not entirely fit the Slovenian case. The development of Slovenian national identity as well as the nationalisation of sports in Slovenia occurred in the absence of a self-governing social formation. Lacking an autonomous and sovereign structure, this kind of phenomenon in organised nation-like communities tends to be the outcome of complex events, contingent on specific circumstances.

Slovenia is a young nation-state situated at the crossroads of Slavic, Hungarian, Germanic and Romance Europe, neighboring Croatia on the southeast, Hungary on the northeast, Austria on the north, and Italy on the west. Its contemporary political form is the outcome of turbulent events that infused the people of the Balkans with nationalist aspirations in the 1990s and resulted in the disintegration of Yugoslavia. The mere geographic and territorial situation provoked, in Starc’s words (2004:6), constant national struggles which the inhabitants of this region have been facing ever since the concepts of the nation and national identity emerged and spread through Europe in the late eighteenth and especially nineteenth centuries and which, later in the twentieth century, were incessantly reestablished (Anderson 1991 [1983]; Gellner 1987; Hobsbawm 1990; Smith 2001, 1986; Thiesse 1999).

In Slovenia, skiing has been represented as the prototype of Slovenianness. The first Slovenian skiers allegedly existed as early as the sixteenth and seventeenth centuries. There is a documented legend, probably well-known to all Slovenians, which says that the traditional Slovenian downhill skiing was born in the region of the Bloke plateau, a semi-forested tableland region located southwest of Ljubljana’s basin. Following this legend, the traditional Bloke skier continued to be present in Slovenia as the proto-skier of the Slovenian modern skiing since the nineteenth century, and received new meanings and accentuations in the media, particularly in the daily press and on television in the last decades of the twentieth century. Particularly in the last decade, details of this legend have often been referred to by television anchors, sports journalists, field reporters, studio commentators, sports analysts and play-by-play announcers with a perceptible attention and passion. They like to mention that the baron Valvasor wrote precise reports on skiing activities in Slovenia as early as the seventeenth century.

This article was first published in Studies in Ethnicity and Nationalism (Volume 7, Issue 2). Click here to keep reading.